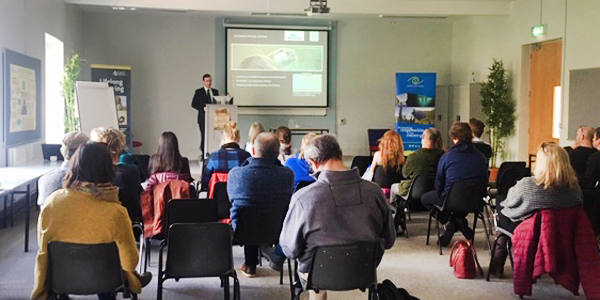 Leave No Trace Ireland, the Irish partner in the NGEurope programme hosted a seminar on April 11/12th  2019. The seminar was held in the Green Campus, in GMIT, Castlebar, Co Mayo. in the west of Ireland. The seminar titled ‘NGO Leadership’ promoted best practice of local and national NGO’s with 6 NGO’s sharing their stories. The NGO’s ranged from the very structured with employees to individuals working on their own with no official structure. The presenters shared their reasons for starting, their missions, their struggles and their visions and how their work impacts locally and nationally.

Leave No Trace Ireland, hosts of the event shared their mission and vision. Leave No Trace have 3 employees and a large number of contract trainers so it was interesting for the participants to see an NGO based locally but working throughout the island of Ireland. Participants also got to hear how this NGO is structured with a voluntary Board of Directors and is compliant with the newly launch Governance Code in Ireland. This is something for NGO’s to strive for but as Leave No Trace explained on the day, it is possible for all NGO’s to reach that level over time.

Georgia Mc Millian who attended the NGEurope training course in Spain shared the story of Mayo Dark Skies. The Friends of Mayo Dark Skies is a group of volunteers who have become ambassadors for the Mayo Dark Sky Park. They are a community voice on the Dark Sky project and work with Mayo County Council and other authorities to raise awareness of light pollution and help develop the Dark Skies concept for everyone to enjoy.  Projects such as Citizen Scientist Light Pollution Monitoring and The Dark Sky Ambassador Programme are organised through the Friends of Mayo Dark Skies. Mayo.  Dark Sky Park is a great example of a collaborative project between our communities, National Parks & Wildlife Service, Coillte, GMIT Mayo Campus, South West Mayo Development and Mayo County Council. We are very proud of the strong partnership formed between local people and state agencies who worked together on this project. The process of preparing a dark-sky application took over two years to complete from initial research undertaken in 2013. Participants were delighted with the opportunity to talk with Georgia regarding how she formed her group and asked questions about funding and insurance, all very relevant to Irish NGO’s. 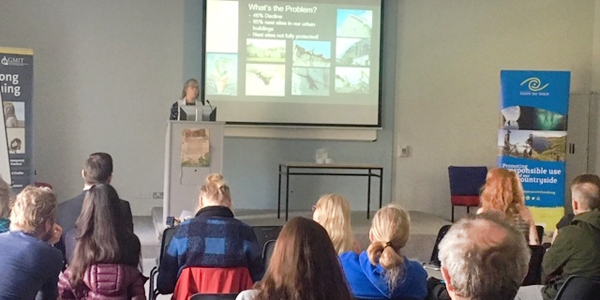 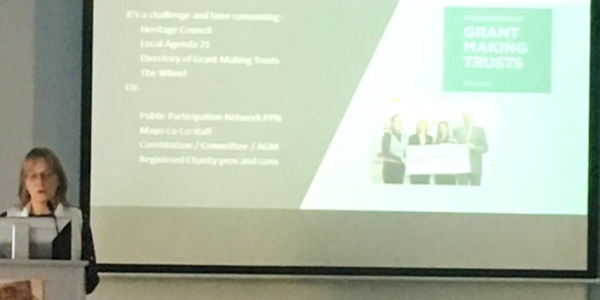 Castlebar Tidy Towns gave an outline of their history, their vision and their reason for existence. Alan Mee gave a visual display of their work, their ongoing struggles, their success and their future plans. Great discussion took place regarding their work and opportunities were identified during the seminar for collaboration with other NGO’s on a number of projects.

Mulranny Environmental Group carry out a wide range of environmental projects in their locality and raise awareness on natural heritage through multimedia & guided walks. They carry out several beach cleans throughout the year and work hard to protect and conserve the fragile dunes system and machair habitats in the area. The group was formed to look at outdoor activities and the broad environment of the whole area,” explained Sean Carolan, chairman of the MEG.   Mulranney’s former Garda barracks, now called the Old Irish Goat centre is an environmental information centre open daily from June to mid-September.  Visitors to the area can get maps for the 6km Mulranney Loop Walk and find out about events during National Heritage Week. They shared details of an ambitious project

The Habitat Mapping and Biodiversity Action Plan which set out to map 1,750 hectares taking in the Nephin Mountain range and the Corraun peninsula.  The landscape ranges from uplands to coastal areas, mature woodlands and wetlands.  These include the machair, a special coastal habitat only found along the West coast of Ireland and Scotland. Bringing everyone in the community into the process is also important to members of the Mulranney Environmental group.  Like the other NGO’s MEG shared their success and ongoing issues. But the message was clear for participants: a group of local community volunteers can make a difference.

The Edible Landscape Project (ELP), a grassroots movement based in Westport, Co. Mayo, has developed a bottom-up approach to climate change and specifically how it relates to FOOD. ELP's mission is to empower people, through public engagement and the delivery of targeted workshops, to make food choices which actually help reverse the effects of climate change. They are educators, designers, horticulturalists, international development experts, sustainability advocates and volunteers. We provide practical educational Food Solutions Workshops for individuals and groups interested in taking action on climate change. They are a movement, empowering people to make informed food choices, taking care of nature and protecting the planet. Their story was very well received by both the participants and the other NGOs’s present. This NGO are currently reviewing their structure so it was timely to share the reasons behind changing from a voluntary to a professional structure and the issues associated with both.

Lynda Huxley from Swift Ireland shared her exciting stories about her Swift Conservation projects on site and it was great to see first-hand the work this organisation does. While the Swifts had not arrived in Ireland in time for the seminar, Lynda showed us the sites, the nesting boxes and the work they are doing to protect these birds on the amber list of birds of conservation concern in Ireland because its population has declined by over 40% in the last 15 years.  The participants at the seminar were from a wide range of backgrounds and were all inspired by Lynda’s story and had an opportunity to ask questions of the NGO leader. The participants got great insight into her inspiration for starting her voluntary work and what motivates her to continue.

The Multiplier Event was a fantastic opportunity to share experiences where participants and speakers could talk openly about their path in the third sector and of the difficulties they are experiencing, but also to celebrate the success they have experienced along the way and how sometimes small success can motivate a group of volunteers to take further action. Participants also had an opportunity to network in smaller groups over coffee breaks and lunch so everyone had an opportunity to have their questions answered. At the conclusion of the seminar, the feedback from the NGO’s was that there are not enough opportunities for networking and as a result collaboration does not take place as much as it could. It was felt that opportunities for NGO’s in rural areas in Ireland to network are more difficult and this seminar was a new opportunity for everyone to be reenergised by each others stories. As a result of this seminar plans were discussed to have a similar networking event for NGO’s in the future.