The head office of FIEB is located in Tres Cantos and the zoo and research center in the Municipality of Casarrubios del Monte, (province of Toledo) where most of the activity takes place.

The Foundation for Research in Ethology and Biodiversity is a private, non-profit foundation dedicated to the protection of nature.

FIEB's founding mission is to develop, support and promote research projects that collaborate in the conservation of endangered species of wild fauna and in the recovery of biodiversity, as established in its statutes. Founded in 2012, since its inception FIEB has positioned itself as a flagship entity in the defense of the environment, through research as the main tool.

"Knowledge is the main weapon to protect our planet and our biodiversity”.

The Center of Fauna and Research of FIEB

In the Center for Research and Fauna FIEB, located in the Municipality of Casarrubios del Monte (Toledo), takes place most of the activity of the entity. With more than 8 hectares, in a unique enclave in a natural environment in the Region of La Sagra, Toledo, the center can be divided into four work areas 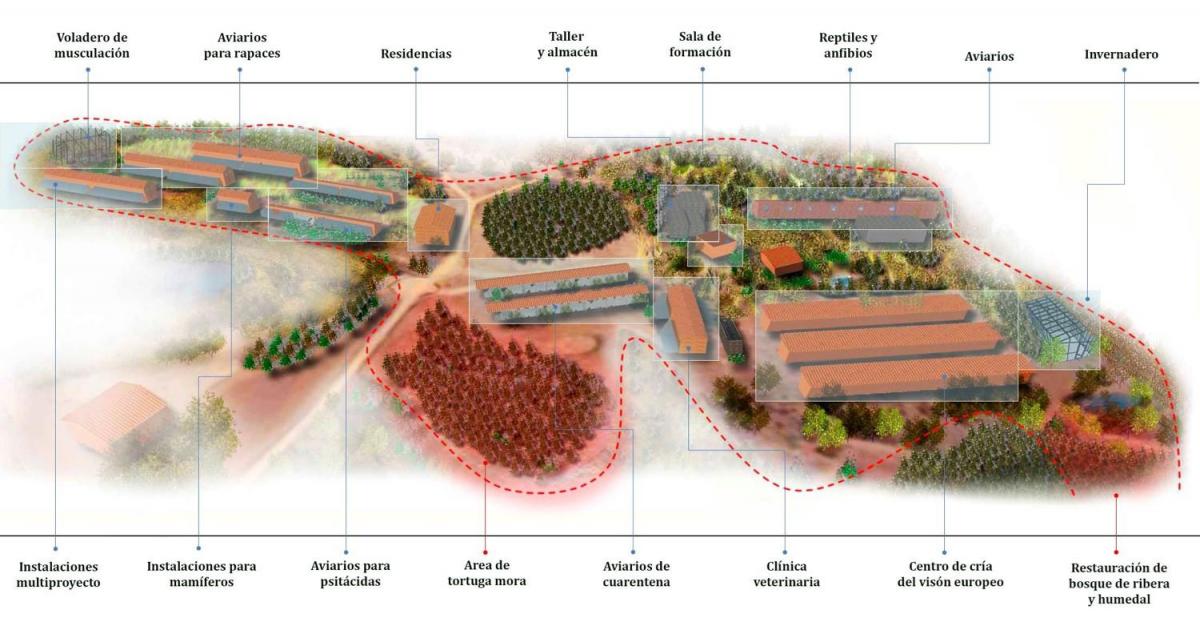 Context: The European Mink Breeding and Study Centre took its first steps in 2013, with the start of the construction of the first 10 facilities of the centre, specially designed for this species. The project arose as a support breeding centre in the ex situ Conservation Programme for this critically endangered species, in collaboration with the Ministry of Agriculture, Fisheries and the Environment.

Development of the project: The aim of the project is to increase the number of individuals against possible drastic decreases of the species in the wild and generate individuals capable of surviving in the wild, with the subsequent aim of reintroducing and reinforcing the free population. To this end, in addition to reproduction in captivity, research and studies are carried out aimed at increasing the survival success of those animals that are likely to be reintroduced to the environment, as well as increasing the scarce knowledge of the species.

Results: Broadly speaking, the results can be summarized in four figures; 28, 29, 24 and 7. 28 facilities built, 24 gestations, 29 minks born from pregnant females in FIEB (19 females and 10 males) and 8 individuals released into the environment.

Future: the future of the European Mink Breeding and Study Centre focuses on the two main challenges facing the species; the reproductive failure of males born in captivity and the low survival rates of released animals. For this reason, FIEB's activities during 2019 and 2020 will focus on reproductive research on the species and pre-loose training of individuals born and bred in the centre.

Context: The black sea turtle (Testudo graeca) is a species historically maintained as a pet in southeastern Spain. However, since 2015, the possession of this species as a pet has been considered a crime (modification of article 334 of Organic Law 10/1995, of 23 November, of the Criminal Code), which has led to a massive entry since then of individuals of this species in the recovery centers. Studies carried out to date in captive populations show high rates of incidence of rhinitis, a respiratory process that can cause the death of the animal. Due to the high rate of contagion of this disease, and the lack of knowledge of the incidence in free populations, rhinitis is the main cause for which, at present, a program of reintroduction of this species in the natural environment is not carried out. In this context, and in view of the pressing need to return viable individuals to the environment, the Firmus Graeca project arose, whose main objective is to be able to carry out a sanitary protocol for the release of testudo graeca.

Results: A total of 441 samples were obtained from 147 individuals, with the following results:

Approximately 70% of captive individuals are positive for M. agassizii, with animals with symptoms having a much higher pathogenic load.

2. There is no evidence of Herpesvirus involvement in either population.

3.         The free populations analyzed are not carriers of M.agassizii or the load is so low that it is not detectable.

Future: depending on the results obtained, research on the disease during the period 2019-2021 will focus on the detection and classification of disease phases according to symptomatology and pathogens, and on the study of the presence of M. agassiizii in other captive populations of this species.

Context: Cryoraptor was born in 2015 with the objective of developing the necessary technologies and broadening the knowledge to allow the creation of a germplasm bank of wild birds, with special attention to raptors. The creation of a germplasm bank is a vital strategy to ensure the obtaining of quality genetic material, and in the case of endangered species, also increases genetic variability as it preserves and maintains this material over time. Considering the increasing and continuous threats of biodiversity loss, the creation of a germplasm bank for wild birds is necessary. The implementation of the project was born not only from the need to build a permanent and closed collection of reproductive material of our bird species, which can act as a safety element against a loss of variability of these or the extinction of a species, but also research in the field of extraction, processing and cryopreservation of gametes in birds. The innovative character of the project stands out therefore in the creation of the first germplasm bank of Iberian birds of prey, and in the development of research works that allow to optimize the techniques of sperm obtaining and to know better the causes of the limitations in the cryopreservation of spermatozoids in birds of prey.

Development: together with the collaboration of the National Institute for Animal Research (INIA), a physical space was created through the purchase of two nitrogen tanks for storing samples under cryopreservation conditions, followed by the design of a series of works in pursuit of the established objectives and the creation of a Network of Collaborating Centres that has given rise to a group of entities involved in the project: GREFA, Brinzal, AMUS and the Zoo-Aquarium of Madrid.

Results: The project has enabled progress to be made in research into the cryopreservation of bird samples, with the publication of several scientific articles in the area of research into animal genetic resources, as well as to obtain the first viable samples of Iberian birds, which already form part of the Germplasm Bank.

Future: Cryoraptor will be included, thanks to the fruits it has given during these years, in the National Germplasm Bank: BancGES. BanGES was established in 2003 through a collaboration agreement between CSIC and the Ministry of the Environment to carry out research and conservation work on critically endangered species in the Iberian Peninsula. Its main mission is to obtain, process and conserve biological material from endangered animal species in order to preserve the maximum genetic diversity, with priority objectives being the cryopreservation of germplasm (sperm, ova and embryos) and tissues and somatic cells, so that these biomaterials are viable and can be used for the reproductive and genetic characterisation of wild species.

Context: The CITES centre for the rescue and reception of animals seized from illegal trafficking was created in 2015 in collaboration with the CITES Management Authority. According to WWF data, the illegal trade in species, driven by international mafia networks, is the third most lucrative after arms and drugs and is estimated to generate 20,000 million euros annually. In Spain, more than 14,000 CITES specimens have been seized between 2005 and 2012, with the trafficking of live reptiles being one of the most significant, especially rare species of different origins that pass through Spain on their way to the major fairs in central Europe, such as the Hamm fair (Germany).

Development: The CITES centre in FIEB has as its main objective the rescue and reception of animal species threatened by illegal trafficking, most of which come from seizures made by SEPRONA and UCOMA. The unique character of the CITES centre of FIEB lies in the three main lines it follows: the reception and rehabilitation of the species, the development of research projects on the species residing in the centre, and the development of projects to protect biodiversity, always ensuring the maximum welfare of the animals housed in the centre.

Results: Since the creation of the CITES_FIEB Centre, the summary of animals hosted is as follows:

Future: In recent years the trade in live reptiles has exploded nationally and internationally, leading to an increase in seizures of live reptiles in Spain. Reptiles are characterized by being ectothermal, that is, their body temperature depends exclusively on environmental temperature, so they are animals that require very strict conditions to survive in captivity, imitating their ecosystem of origin. The wide variety of individuals that enter the centre (desert, tropical, arboreal...) gives rise to the need for new terrariums that imitate the optimum habitat for each of the species. Therefore, during 2019, a facility specially designed to house reptiles will be built in the centre.

Context: The application of new technologies is fundamental in the development of any area. In the last twenty years, technological advances have transformed society and our way of living in all areas. In FIEB, we use new technologies in conservation, carrying out a pioneering activity, as the application in this field is still rare. Since the birth of FIEB and through the development of research, development and innovation projects, a line of work has been developed aimed at improving the monitoring of ecosystems, the collection of data on fauna in captivity or the management of conflicts with wildlife.

Context: The accelerated degradation and destruction of ecosystems is one of the main causes of the current environmental crisis. A healthy ecosystem provides multiple environmental services, such as water production, CO2 fixation, matter cycles, soil productivity, promoting biodiversity, preventing desertification... In this context, reversing the processes of ecosystem degradation and accelerated loss of biodiversity through ecological restoration is key. The protection of representative areas is no longer sufficient, connectivity has proven to be one of the fundamental factors to ensure the survival of ecosystems, so work must be done to restore landscapes, ecosystems, communities and populations of plants and animals.

We have multiple students who do their internships in the center. Students of undergraduate, master, professional training, training schools, all of them have a place in our foundation. Each student focuses part of their time on a specific area or project depending on their training, and another part on understanding and collaborating in the normal functioning of the centre, collaborating in transversal tasks.

FIEB offers to receive interns interested in the fields in which the foundation works.